Hundreds of thousands of Ukrainians every year take advantage of a special visa allowing them to work in Poland, escaping poverty and unemployment back home. But many of them have been using the visa as a backdoor into the European Union, landing them in a “gray zone” of quasi-legal labor that often leaves them vulnerable to exploitation.


In Estonia, a transnational pipeline of both real and fake companies has sprung up to create documentation for workers that allows them to be nominally employed by Polish firms, then “posted” to the Baltic nation for up to three months, an OCCRP investigation has found.


Once there, the workers can earn more than at home, but are also easily abused by the companies that brought them into the EU — induced to work long hours for less than Estonia’s minimum wage for foreign workers, and sometimes left without pay altogether when the companies disappear.

The Schengen area covers 26 European Union countries that have largely abolished border controls between them. The more than 400 million citizens of the EU, as well as other legally present visitors, can travel, work, and settle freely within the zone without needing visas for each different country.


Poland was projected to issue 900,000 of these visas to Ukrainians last year alone. Known as a “D-visa,” the document grants the right to work in Poland for a year, and be posted to any EU country in the Schengen area for 90 days. This has created a thriving market for fake Polish firms that do nothing but charge fees to issue documents promising to employ foreign workers, according to a 2018 report by Poland’s Supreme Audit Office.


Papers in hand, migrants can then easily enter Estonia or other parts of the Schengen zone through Poland, and may decide to overstay for months after their “posting” is supposed to end. In other cases, they travel to Estonia without being officially posted at all, leaving them totally off the radar of local authorities.


Liis Valk, an expert at the Identity and Status Bureau of the Police and Border Guard Board of Estonia, said migrant laborers frequently enter a number of different EU countries on Polish D-visas.


“The scheme varies in different countries depending on local regulations,” she said. In Estonia, hiring “Polish” workers helps employers cut costs.“I do think that is the main reason why such schemes are used,” she said. “It is to avoid duties, official salary, and paying taxes.” 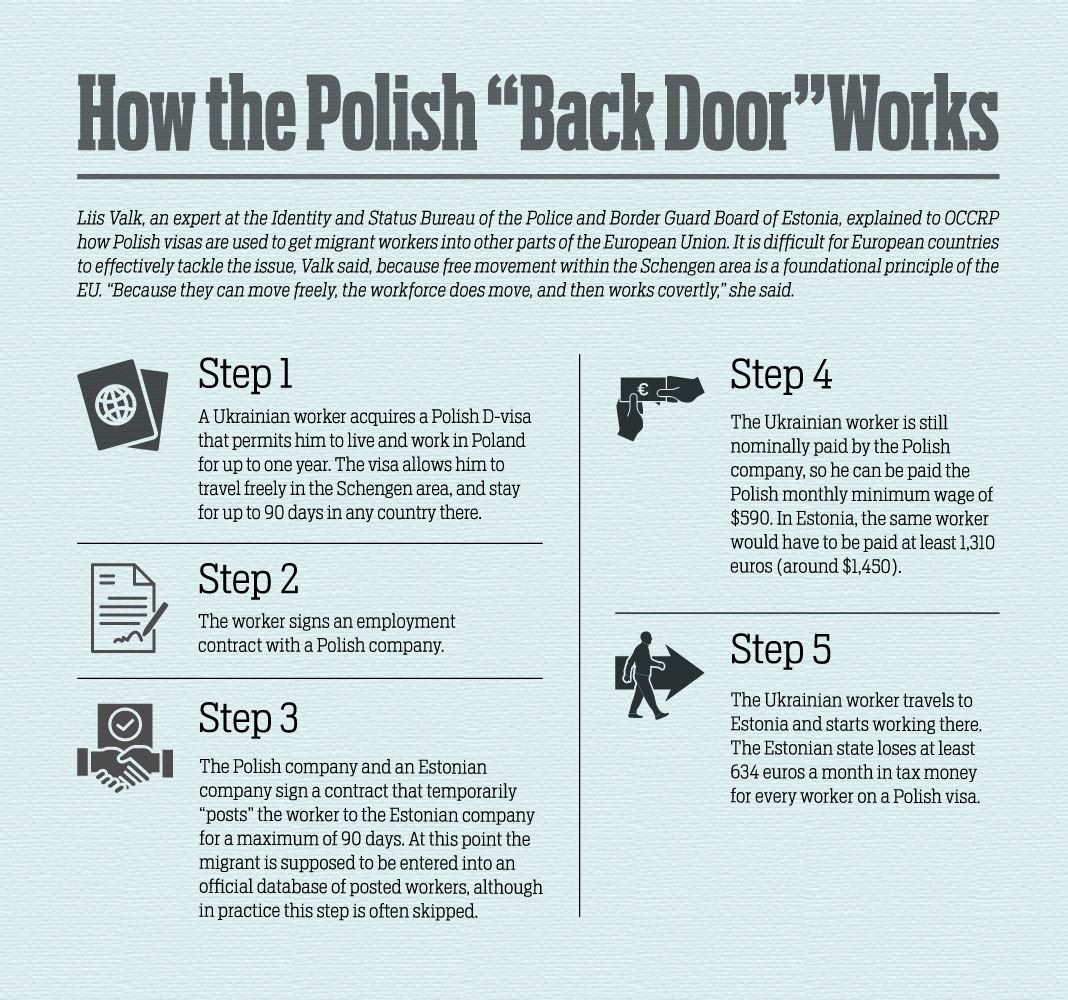 One of these laborers, Ruslan Batovskyi, bought a Polish D-visa through a Ukrainian agency for around 100 euros in the summer of 2018, hoping he would be able to use it to find better-paid work elsewhere in the EU. He knew he was doing something “semi-legal,” as he put it, but the risk seemed worth taking for the promise of a good job.


He answered an advertisement from an Estonian recruitment firm, Goodstaff, and was quickly sent to the remote northern city of Tapa and set to work in an auto-parts factory. With his D-visa in hand, Batovskyi immediately started working 12 hours a day, for 5 euros an hour.


In spring 2019, Goodstaff started delaying his wages and eventually stopped paying him at all, leaving him stranded in northern Estonia and owed some 2,300 euros ($2,554) in unpaid wages.


Not only did Batovskyi, a veteran of the war in Crimea, find himself jobless and broke, but Goodstaff had never paid taxes on him since he entered the country as a “Polish” worker, which left him without health insurance or social security in Estonia.


“What makes me sad is that the law that should protect workers is weak,” he said. “In my situation, I can be left without the money I have earned.”


Poland opened its doors to immigrant workers in 2006 to ease a shortage of labor in the agricultural sector. Initially just a small stream of migrants arrived, but after Russia’s annexation of Crimea in 2014 and the ensuing outbreak of war in Ukraine, the numbers started to rise by as much as 200,000 a year.


“At the beginning it was 100,000 or 200,000 permissions per year, but after the war in eastern Ukraine started, this number instantly grew,” said Pawel Kaczmarczyk, director of the Centre of Migration Research and an adjunct professor at the Faculty of Economic Sciences at the University of Warsaw.


Drowning in paperwork, consular workers started cutting corners. According to the 2018 Polish audit report, the average visa application was rushed through in two to four minutes — barely enough time to check if all the relevant fields in the papers had been filled out. 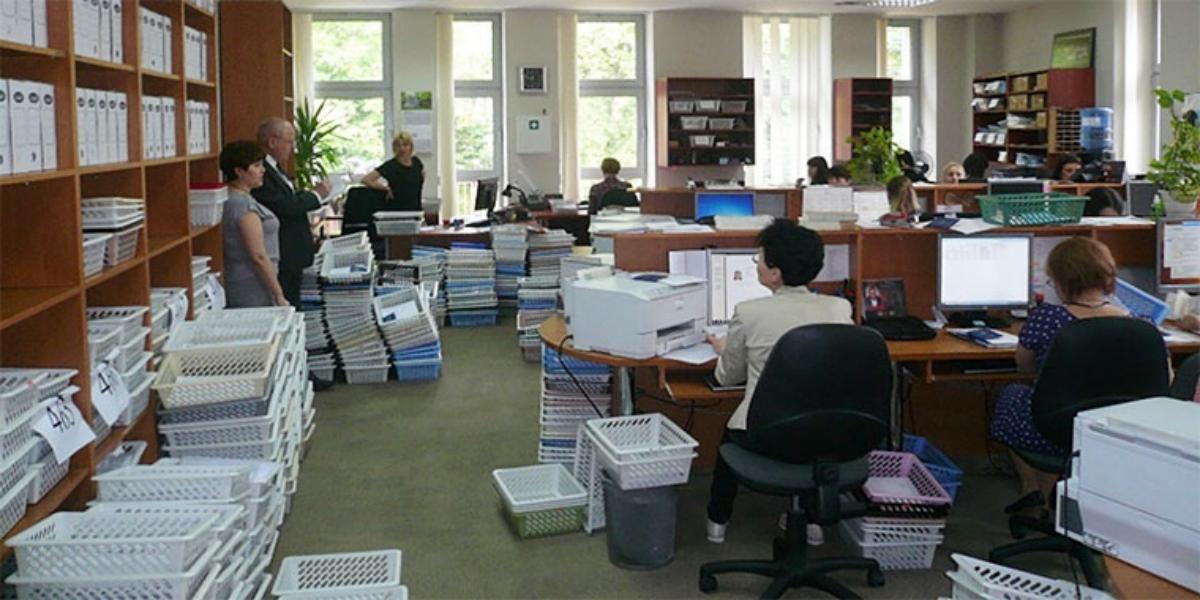 The report said that Poland’s relatively open system of migration for Ukrainian citizens in particular had been widely exploited, “enabling foreigners to come to the Schengen area for purposes other than the declared employment in Poland.”


In recent years, 72 percent of Ukrainians who applied for a Polish D-visa never went to work for the Polish company that said it would hire them, and 90 percent were never registered with Poland’s health system, according to the report. The auditors also found that 40 percent of these companies didn’t exist at all, reporting no revenues to the state. One even registered a bus stop as its business address.


“The staff of consular offices was definitely insufficient to handle such a large number of visa applications,” the report said. “There is a high probability that some companies were fictitious entities created only to obtain working visas.”


“Declarations of intent [to employ foreign workers] were often the subject of illegal trade,” the auditors added.


In Batovskyi’s case, the Ukrainian agency he used had contacts with Polish firms that could issue a declaration of intent. His Polish visa was tied to a fictitious promise by a factory there to employ him. But he couldn’t remember the name of his so-called employer, or even the town where he was supposed to be working.


“[It says] where I should start working, in a Polish organization,” he explained. “But I didn’t work according to that visa, because I moved on” to Estonia. 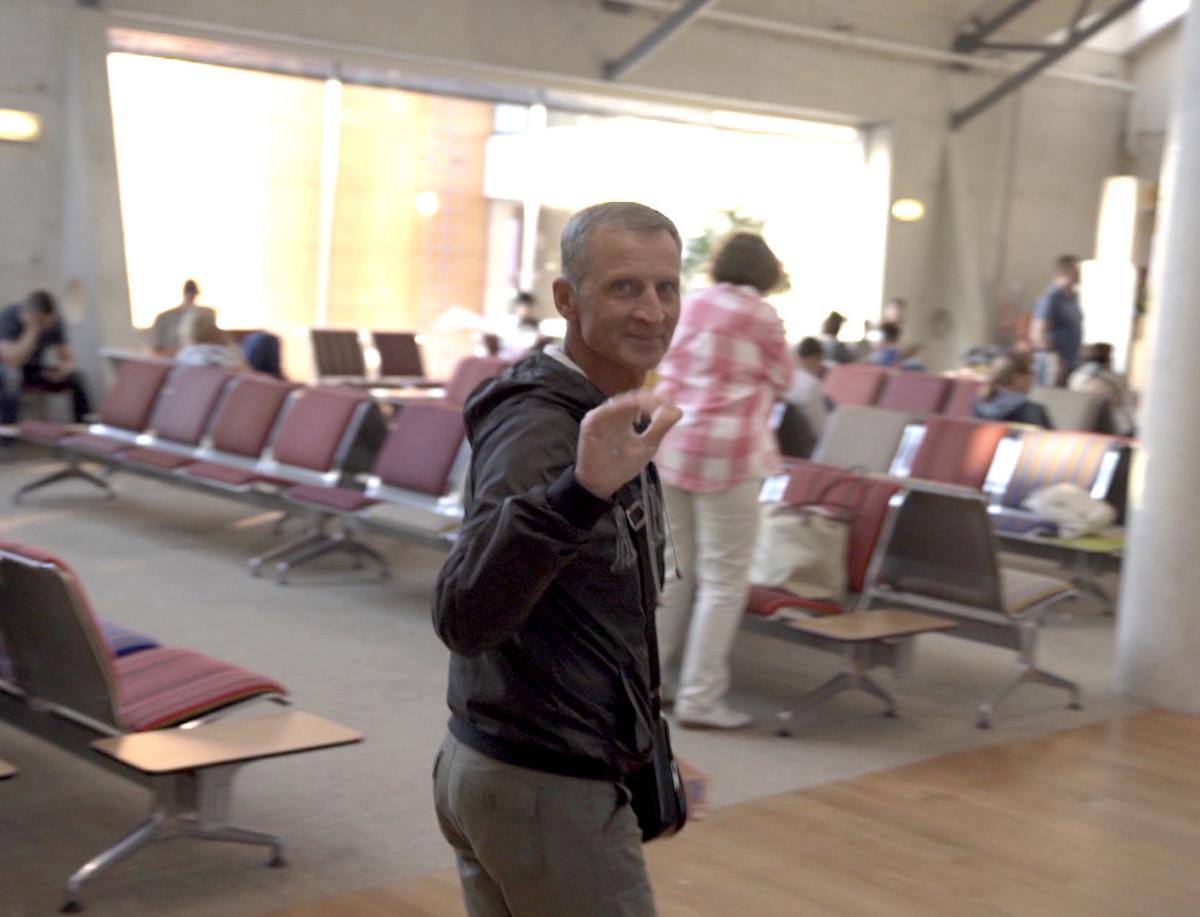 In 2018, Poland made changes to its migration system, forcing companies to register workers on arrival in a separate database. Around the same time, Estonia simplified its own system in an effort to encourage workers and employers to go the direct route. More than 9,500 Ukrainians applied directly for Estonian work visas in 2019, up from about 700 in 2017.